Today it’s impossible to escape the endless list of toxins and chemicals that enter our environment day after day. Fumes from cars, radiation from computers, the earth’s depleted ozone layer, packaged foods that have been over-processed, pesticides sprayed onto crops, to mention a few. It’s no wonder that so many North Americans suffer from toxic inflammatory diseases. But there is a natural way to boost the immune system. 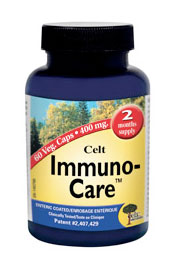 Fortunately, our own immunity works 24/7 against toxins that enter the body and trigger allergic reactions. Without this natural defence our bodies would decompose in a few days due to  microbes, parasites and toxins. Every year North Americans, on average, suffer six common colds due to weakened immune systems. But infections become  more dangerous as we age. For instance, during early life influenza is rarely fatal. But later, when it strikes an exhausted immune system, it results in the deaths of thousands of seniors  every year.

Nor is today’s stressful life kind to our immune systems. Chronic  stress triggers the release of pro-inflammatory cytokines which increases the risk of cardiovascular disease and auto-immune disorders such as psoriasis and Crohn’s disease. It’s estimated that in North America there are 30 million allergy sufferers. Some people have acute anaphylactic attacks that are life-threatening. But the majority are affected by pollen, animal dander, dust mites in bedding and moulds that collect in showers, window moldings, and damp basements that cause in?ammatory reaction in the airways.

To test the effects of stress on healing, researchers compared women who had to care for Alzheimer’s patients and those without this stress. Both groups were subjected to a small skin biopsy. The caregivers took 24 percent longer to heal. Another threat today is exposure to radiation. In addition to X-ray and CT scans we’re constantly exposed to home-radiation from cell phones, microwave ovens and transmission towers. Moreover, although television gives off radiation from one station, our bodies receive transmissions from many more stations. And unlike an infection that goes away, radiation never does, accumulating more year by year. Since no one can live as a hermit, what can be done to bolster immunity from seasonal allergies, fibromyalgia, constant fatigue, aching muscles, prostate problems and rheumatoid arthritis conditions, some associated with pain and inflammation?

Dr. John Wilkinson, Senior Herbal Medicine Lecturer at Middlesex University, London, England, says the answer is plant sterols which, like vitamin C, cannot be made by our body. Studies show that plant sterols reduce inflammation, which helps to decrease  the risk of atherosclerosis (hardening of arteries), often requiring by-pass surgery. This is why plant sterols have been called nature’s “immunologic scalpel” without the need for surgery.

A natural remedy, Immuno-Care  good start. Research has also shown that regular exercise can bolster the immune system by stimulating the body’s natural killer cells. Immuno-Care also helps to correct this loss and restore balance to the immune system. One capsule contains 300 mg of plant sterols along with Enzogenol 20 mg, a potent antioxidant and anti-arthritic that contains over 2,000 different antioxidant flavonoids. Antioxidants  help to detoxify free radicals, the waste products of metabolism  associated with aging. And to assure that they’re not destroyed by the stomach’s acid they’re enteric coated which allows absorption in the small bowel.

The dosage of Immuno-Care, is one capsule daily taken 30 minutes before a meal with water or fruit juice. Women who are pregnant, nursing or diabetic should consult their doctor before taking this supplement. An added benefit is that Immuno-Care, when taken before a meal blocks the intestinal absorption of cholesterol resulting in a  decrease in bad cholesterol and an increase in good cholesterol.

by Alan Fergusson and Jack Davidson at your local Health Food store.