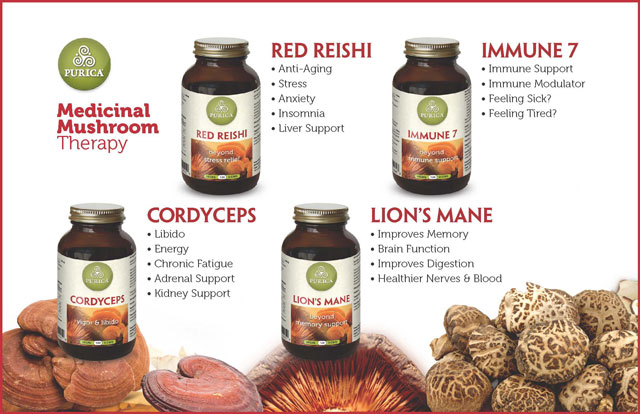 Mushrooms have historically been an integral part of Eastern medicine and have more recently become a powerful addition to alternative Western therapies. Each mushroom’s intricate characteristics help to enhance the immune system in very specific ways.

Fungi are extremely powerful environmental aids in the forest, having the capacity to absorb and neutralize poisons such as herbicides, pesticides and toxic waste. They help manage the ecosystem, and are responsible for its regeneration and rejuvenation. Their unmatched ability to restore balance within Mother Nature is precisely what they accomplish within our body’s internal environment.

One of the main functions of the immune system is to identify and destroy distored cells and it is only when this is not accomplished that disease occurs.  Medicinal mushrooms support proper white blood cell behaviour therefore stop diseased cells from replicating. Mushrooms are nature’s powerful therapy in addition to being nutrient-rich, with high levels of protein, fibre, vitamin B, calcium and other minerals.

The two most powerful mushrooms are reishi and cordyceps. The historically revered red reishi affects over 300 biochemical processes and functions of the liver. Cordyceps sinenesis, called the king of mushrooms, dates back to the Tang dynasty where it was a national medicinal treasure partially because of its effect on adrenal glands and ability to increase libido. Cordyceps was more recently credited when a group of nine athletes in the 1993 Chinese National Games shattered their individual world records, due in part to this mushroom’s ability to increase cellular energy by as much as 55 percent.

When used in formulations, these unique mushrooms carry added benefits. All help to offset the side effects of medical therapies such as chemotherapy by reducing symptoms such as loss of appetite, vomiting, nausea, hair loss and diminished white blood cell count. They do not disrupt or change the benefits when combined with any other therapies. Medicinal mushroom therapy is commonplace in other countries to assist in eradicating disease.

Growing conditions are crucial. Attention must be paid to selecting species around growth parameters of temperature, light and oxygen, and they must be fully mature.

The substrate or surface on which it grows is unique to each species. In order that you pay for mushrooms alone, the less substrate in the finished product the better. Higher medicinal properties are attained when the entire substrate (which feeds the mushroom) has been consumed in a full growing period.

No irradiation (which can decrease health benefits) is necessary when mushrooms are grown in a pristine environment because cross-contamination is impossible.

Nanosizing reduces size of particles down to less than 2 nanometres so it’s more absorbable to the body, making the difference between a good result and an outstanding one. Achieved by a simple milling process, nanosizing increases potency five to ten times.

The greatest potential for biological rehabilitation and sustainability lies within the brilliance of fungi. Mother Nature’s mushrooms are also invaluable as powerful healers within our internal environment, fighting battles within unseen terrain. Given the state of today’s world, supporting our immune system is a proactive preventative step in our health.

Maureen Fontaine, B. Ed, ECS, CN, MH, is a diet and wellness consultant.