If you’re finding you’re a little more forgetful than you used to be, and losing the car keys is a regular event, you might want to try Lion’s Mane mushroom. Although aging is a primary cause of memory loss, stress, anxiety and lack of sleep also contribute greatly, according to Harvard researchers. 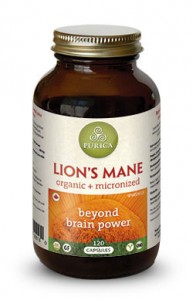 Lions’ Mane (named for its long, mane-like tendrils) helps address memory loss on a number of fronts. In helping to calm the nervous system, it has been shown to improve focus, concentration and memory. This is likely due to the mushroom’s ability to stimulate the synthesis of nerve growth factor (NGF), a small protein crucial to the growth, maintenance and survival of neurons. NGF is a primary building block of brain health and neuroplasticity and helps to protect its functioning.  NGF can decline with age and cannot be replenished by NGF circulating within the body because the blood brain barrier prevents its entry. Lion’s Mane contains two substances—hericenones and erinacines— that pass easily through the blood-brain barrier and work within the brain to encourage the renewal and production of NGF.

A study published in Biomedical Research (2011) examined the effects of Lion’s Mane on brain function in mice. The results showed that it helped protect against memory problems caused by the buildup of amyloid beta—a substance that forms the brain plaques associated with Alzheimer’s disease. While this was an animal study, it is likely the same effect applies to humans.

In addition to memory enhancement, Lion’s Mane has a wide array of cognitive benefits, including the improvement of focus and concentration, and reduction of depression and anxiety.